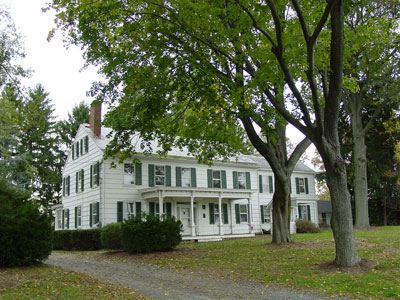 The farmstead started in 1686 as an 8-by-10-foot settlers' cabin on 115-plus acres. As of 1915, the farm consisted of 23 outbuildings and the farmhouse and 86.60 acres of farmland, plus 26 acres of orchards. Outbuildings consisted of 6 chicken houses, 1 corn crib, 1 double corn crib, pig house, cow barn, horse barn, silos, hay scales, well house, woodshed, smokehouse, etc.

In 1750 the first addition was made to the house to make it a 1-and-a-half-story 2-bay farmhouse, consisting of a fieldstone foundation with hand-hewn post and beam construction - some bark is left on roof rafters. Originally the entrance to the 2nd floor was from the rear of the house. The original set of steps from the 1st to the 2nd floor is now used to get to the basement.

In 1830, a second addition was made to the house, and in 1873 the kitchen was moved to the east wing of the house, which was brought from another part of the property (probably the orchard).

Charles Oakley, Jr. purchased the farm in 1911 from Acton Civil Hartshorne. In 1924, further renovations were made to accommodate his son's family. Charles Oakley, Jr. died in 1932 after falling out of the hayloft. The property was then transferred to his daughter Elizabeth Oakley, who continued farming the land until 1972. At that time, Elizabeth leased the land for soybean and corn production and then to a tenant farmer as a sod farm.

As of 1981, the farm was one of the oldest working farms in Monmouth County. It started as a subsistence farm in the early 1700s, when family members worked the land. However, according to 1860s records, former owners George Walker and Elijah Combs used slaves to work the farm. Typical crops such as rye, Indian corn, wheat, potatoes, sugar peas, oats, beans, and hay were grown. Also, pork, beef, poultry, and butter were sold. Charles Oakley, Jr. totally mechanized the farm around 1924. Apples and potatoes were taken from the farm and shipped by rail to Wallabout Market, Brooklyn, New York, and sold.

People Associated with the Farm

The following is a list of people associated with the farmstead.

Robert Barclay sold the farmstead tract of 500 acres to John Reid in 1699. Robert Barclay and other Scottish proprietors of East New Jersey employed Reid, a Scots Quaker, in 1683 as overseer in charge of a party of emigrants from Scotland. Reid was appointed Surveyor General of the province in 1702 and was a member of the General Assembly in 1703.

John Reid sold 200 acres of the tract to John Bowne in 1701. John Bowne, son of Captain John Bowne - a patentee and one of the 5 original settlers of the Monmouth patent granted by Governor Nicolls - was a member of the Provincial Assembly, taking part in the Second Assembly in 1704 and the Third Assembly in 1707. Although both John Reid and John Bowne resided in Freehold, it is not likely that either resided on the farmstead tract.

John Bowne sold the 200-acre farmstead tract to Richard Clark in 1706. Nothing is known about Clark; he was probably a farmer and most likely resided on the property, as his deed to the following owner mentions a house.

During this period, the farm was owned by George Walker and his descendants. His son, George Walker, Jr., Inherited the property in 1748. Little is known of either Walker, except that the son served in the Revolutionary War in Captain Waddell's 1st Regiment Company. Captain George Walker, Jr., died intestate in 1794, leaving Aaron Forman Walker, the administrator of the estate, which was sold in 1801 to Elijah Combs.

During this period, Elijah Combs actively farmed the property, which consisted of 289.90 acres. A man of some means, Combs was probably responsible for developing the farm to its present appearance. His 1831 probate inventory accurately describes the farmhouse as it was at that time.

The farmstead was sold by the Commissioners of Monmouth County for the estate of Elijah Combs to Rulif R. Schanck. The total acreage at the time was 226.45 acres. Schanck proceeded to sell off some of the acreage. By the time he sold the farm to Richard S. Hartshorne, Jr. in 1842, the tract was reduced to 143.23 acres. It remained this size until the Route 33 By-pass was built through the northern edge of the farm. This reduced its size to 115.34 acres.

The farmstead was sold by Rulif R. Schanck in 1842 to Richard S. Harsthorne, Jr., a New York businessman engaged in the selling of oil under the name Van Vorhees and Hartshorne. A native of Matawan, where he was born January 6, 1814, and a descendant of Richard Hartshorne, one of the original Monmouth patentees, Hartshorne bought the Freehold property in the spring of 1842. He moved in with his family and took up commercial farming. He remained there with his family until April 1, 1871, when he moved to Freehold, still carrying on his farming business. Around July 1, 1872, while stowing away hay in the barn, he slipped and fell 20 feet to the floor, receiving substantial injuries, from which he died on July 29, 1872. His son, Acton Civil Hartshorne, a prominent member of the Monmouth bar, bought the farm from the estate of his father in 1873.

Acton Civil Hartshorne was born October 12, 1843, on the homestead farm. From 1859 to 1866, he was employed by Holmes W. Murphy, Esq., Clerk of Monmouth County, as a copyist, acting as deputy clerk and attending chiefly to searching and preparing abstracts of title. In 1866, Hartshorne entered the office of the Honorable Governor Joel Parker, where he served a regular clerkship as student-at-law, and, at the February term of 1870, was admitted to practice in the courts of the State of New Jersey as an attorney-at-law and solicitor in chancery; in 1876 Hartshorne was admitted as counselor-at-law. On May 1, 1875, he formed a law partnership with the Honorable Chilion Robbins, former judge of the court of common pleas of Monmouth County, under the name Robbins and Hartshorne. Hartshorne also served as special master and examiner of the court of chancery and that of Supreme Court commissioner. He married Georgie E. Bibb, granddaughter of Governor and U.S. Senator Bibb of Alabama. Hartshorne attended the World's Exposition in Vienna as a Commissioner from New Jersey appointed by the Governor, under an act of the legislature. Due to his prominence as a public figure, Hartshorne maintained an office and home in Freehold and leased the farmstead to tenant farmers. In 1911, Hartshorne sold the farm to Charles Oakley, Jr., a general-purpose farmer from East Williston, Long Island, NY.

Title to the Property

The following is the chain of title to the property now called Oakley Farmstead.