While chemical control is considered by many to be the most reliable means of suppressing populations of the black-legged tick (Ixodes scapularis), use of conventional area-wide (habitat-targeted) acaricides is generally viewed by the public as having undesirable environmental impacts. There is thus a need to develop new integrated technologies for residential tick control that receive widespread community acceptance by minimizing environmental impacts. 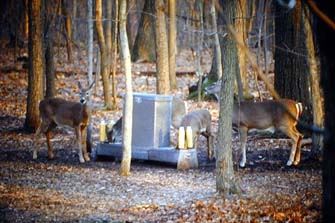 The aim of this research is to demonstrate that the combined use of several tick control strategies could reduce tick populations more rapidly and to a greater extent than when used alone.

In fall 2003, we began testing an integrated control strategy to rapidly achieve and sustain reduced numbers of black-legged ticks in a residential area in Millstone Township. We combined two host-targeted technologies in conjunction with single, barrier acaricide applications to sequentially attack each post-embryonic life stage of the tick. Those technologies included:

Bait boxes that treat white-footed mice (Peromyscus leucopus) and eastern chipmunks (Tamias striatus) as they contact an acaricide-treated wick while entering and exiting the box to feed on the bait. Nymphal and larval ticks are subsequently killed when they attempt to feed on treated rodents.

Applies acaricide for the control of ticks parasitizing white-tailed deer (Odocoileus virginiana). Deer are treated as they rub their head, neck, and ears against acaricide-laden paint rollers while feeding on bait corn. 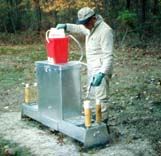 of 3 meters and 13 meters from the lawn-forest interface. Prior to the larval activity period, bait boxes were retrieved and replaced with new bait boxes. Finally, four '4-posters' have been deployed beginning in Fall 2002 within the study site in areas with significant deer activity to achieve a minimum density of 1 '4-poster' per 20 hectares. Three additional '4-posters' were deployed in an adjacent residential community to minimize deer migration into the treatment area. The '4-posters' were treated and maintained weekly throughout the peak activity periods of I. scapularis adults. Pre- and post-intervention abundance of host-seeking ticks was measured by drag sampling and live-trapping small mammals.

We hypothesize that following a single limited acaricide application to control 95% of nymphs, the deployment of rodent bait boxes against nymphs and larvae and the '4-poster' system against adults would maintain tick populations at extremely low levels. Granular deltamethrin applied to the lawn/forest edges of participant properties resulted in 100% control of host-seeking nymphs. Nymphal and larval tick burdens on targeted small mammal hosts at treated properties were reduced by 92.7% and 95.4%, respectively, after the first year (2004) of combined interventions. Over the same period, populations of host-seeking nymphs, larvae, and adults were reduced by 58.5%, 24.8%, and 77.8%, respectively. Following interventions in 2005, tick burdens on small mammals were maintained at similar levels, while control of host-seeking nymphs, larvae, and adults increased to 94.3%, 90.6%, and 87.3%, respectively.

By sequentially attacking each post-embryonic stage of I. scapularis with host-targeted technologies, we have demonstrated that local tick populations can be rapidly suppressed, while dramatically reducing the number of acaricides introduced into the environment. Although additional research is needed to overcome technical and regulatory issues, such an integrated approach offers an alternative for health officials, managers of public lands, and the pest control community in response to the mounting threat of tick-borne diseases.