The blacklegged or deer tick is found throughout the eastern portion of the United States and several upper mid-western states. Despite its extensive geographical distribution, most Lyme disease cases are found in coastal northeastern and mid-Atlantic states. In New Jersey, the blacklegged tick, and the diseases it transmits, are most common in rural and suburban wooded areas throughout the State.

In New Jersey, the life cycle of the blacklegged tick requires about 2 years to complete. Adults are active in the fall, during the winter when temperatures rise above freezing, and in the spring. After mating and feeding on a host, usually a large- to medium-sized mammal, the engorged female drops off the host, finds a secluded location, digests the bloodmeal, and eventually produces an eggmass containing up to several thousand individual eggs. These eggs hatch into uninfected larvae during the summer. There is little transovarial passage of spirochetes from infected females to eggs. The larvae typically quest at ground level in the leaf litter. This host-seeking behavior favors the location and feeding upon small mammals and certain birds. After feeding for several days, larvae will drop off the host, over winter, and molt to nymphs the following spring. If a larval tick fed on an infected host, it will become infected and carry the pathogens through the molt (transstadial transmission) to become infected nymphs. Nymphs also quest at or near ground level and tend to feed on the same small mammals and birds as larvae. After feeding for 3 to 4 days, the nymphs will leave the host, digest the blood, and molt to adults in the fall of the same year. If the nymph was infected by feeding on an infected host (reservoir) as a larva, it now has the opportunity to transmit the spirochetes to the next host upon which it feeds. Nymphs that were not infected have another chance to obtain spirochetes from the second feeding. Spirochetes are also transstadially passed from the nymphal to the adult stage. Unlike the immature stages, adults frequently quest on shrub layer vegetation and, therefore, tend to encounter larger animals as hosts. Again, the females will mate and feed for 5 to 7 days, thus completing the life cycle.

Several important points bear emphasis. First, although different generations are involved, the activity period of nymphs precedes that of larvae during any given year. As a result, nymphs have the opportunity to feed upon and infect an array of small mammals that will serve as hosts for larvae 6 to 8 weeks later. This phenomenon is largely responsible for the inordinately high infection prevalence of Lyme disease spirochetes in nymphal and adult blacklegged ticks. Secondly, adults normally become inactive as temperatures drop below freezing during winter and resume activity as temperatures increase in spring, giving the appearance of a bimodal activity period. However, unlike lone star and American dog ticks, adult blacklegged ticks will resume host-seeking activity during winter when temperatures rise above freezing. As a result, Lyme disease transmission risk may be substantial even during winter months.

Since most cases of Lyme disease occur between May and July, transmission appears to be epidemiologically linked to the activity period of nymphal black-legged ticks. People tend to be more active in tick habitat during this time and since nymphs are quite small, many feed becoming fully engorged with blood without ever being noticed. However, some Lyme disease cases have been reported with a month of onset between October and April. Therefore, transmission during the fall, winter, and early spring can only result from exposure to infected adults. Although adults have a much higher spirochete infection prevalence than nymphs, fewer Lyme disease cases occur during this period because adult ticks are less abundant; fewer people are active in tick habitats; those people who are active generally wear multiple layers of clothing; people like hunters, hikers, bird watchers, and others who engage in outdoor recreational activities are generally more knowledgeable about tick bite prevention; and adult ticks, because they are much larger than nymphs, are more easily seen and removed before they transmit disease pathogens. 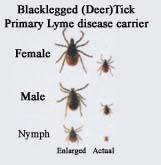 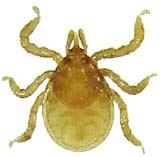 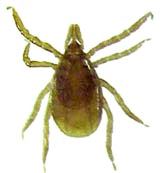 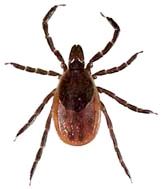 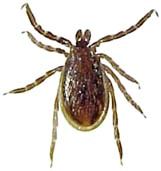