Although lone star ticks may be found along coastal areas of some northeastern states, central New Jersey marks the northern extent of significant inland populations of this species. It is found as far south as Florida and west to Texas. Throughout its range, the lone star tick may be quite abundant and, coupled with its aggressive behavior, is considered a serious pest to humans, livestock, and wildlife. In New Jersey, it is common in wooded rural and suburban areas from Monmouth to Cape May Counties.

The life cycle of the lone star tick is similar to that of the blacklegged tick, with several notable differences. Unlike blacklegged ticks, which acquire hosts passively through ambush (questing on vegetation or in the litter awaiting a passing host), the lone star tick is also a hunter and will actively pursue hosts by moving towards a carbon dioxide gradient or source of vibration. Because the lone star tick seems resistant to hot, dry conditions that may result in desiccation of other tick species, all active stages will quest above ground on vegetation. In lone star tick-infested areas, it is common to brush against vegetation and acquire one or more clusters of several hundred or more larvae or "seed ticks." Again, this questing behavior increases the chances of encountering larger mammal hosts. Consequently, although the lone star tick is known to feed on a variety of small mammals and birds, it most often feeds on white-tailed deer. 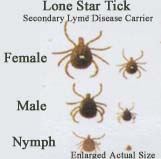 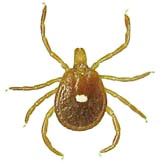 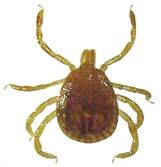