The American dog tick, often erroneously called the wood tick, is found throughout much of the eastern United States. It is found throughout New Jersey in rural and suburban areas, but is more common in overgrown fields and wooded edges than in forests. In urban areas, American dog ticks may be locally abundant in vacant lots, rights-of-way, or similar areas where vegetation is not maintained.

Larval and nymphal dog ticks are known to infest a variety of hosts, including: white-footed mice, chipmunks, meadow voles, rats, squirrels, opossums, and raccoons. Adult ticks are usually reported from medium- or large-sized mammals, including: horses, cattle, white-tailed deer, opossums, and raccoons. The American dog tick has been implicated in the transmission cycles of several diseases, most notably Rocky Mountain Spotted Fever.

In New Jersey, the typical life cycle takes 2 years to complete, but each stage can survive for extended periods without feeding. Adults first appear in March and may be encountered through the spring and summer. Larvae and nymphs are most abundant in spring and summer months, respectively. 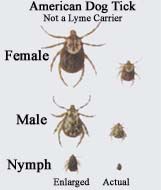 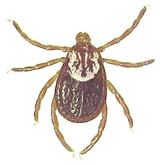 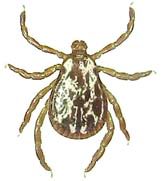