In addition to the presence of suitable tick habitat, any assessment of the risk of encountering ticks must also take into account the quality, amount, and accessibility of the habitat at the subject site, as well as the target human population that will use the site. For example, a park that is comprised almost exclusively of ideal tick habitat and where people are encouraged to access tick habitat (wooded campsites or picnic areas) provides considerably more risk than a park of equal size that has a small amount of marginal habitat and limited public access. There may also be substantial differences in risk within a particular site. Using the same park analogy, people playing basketball on paved courts or baseball on well-maintained athletic fields, for example, are at minimal risk compared to the others who spend several days living at a wooded campsite. Park employees who routinely enter tick habitats as part of their job may be considerably more at risk. The manner in which people use different areas must be considered when evaluating potential risk.

Ticks are not uniformly distributed in nature and even in seemingly ideal habitats may be scarce or absent. Therefore, assessment of actual risk can only be determined by surveying suspect areas for ticks. The most efficient and cost-effective way to accomplish these assessments is by conducting dragging and/or walking surveys. Tick drags or flags are constructed of a piece of light-colored cloth attached at both ends to wooden dowels. A rope handle is attached to both ends of the leading dowel to facilitate the working of the drag across vegetation or leaf litter for a measured distance or length of time and then counting ticks adhering to the drag. Alternately, an estimate of tick abundance can be made by simply walking through potentially tick-infested habitat and counting ticks adhering to clothing over a prescribed distance or time period. Individuals who perform drag sampling surveys are, in reality, also conducting walking surveys. The use of protective clothing is strongly advised when considering either sampling technique. Light-colored, long-sleeved, full-length coveralls duct-taped to rubber boots provide the best protection.

The use of either or both survey techniques requires a complete understanding of the differences in seasonal activity periods and questing behavior exhibited by different tick species and/or stages. For example, walking surveys are ideal for estimating the abundance of ticks that quest above ground on shrub layer vegetation (all stages of lone star ticks and adults of blacklegged and American dog ticks), but are of little value in sampling the species whose immature stages quest at or near ground level (blacklegged and American dog ticks). Similarly, the use of drags in dense vegetation will not accurately estimate populations of immature blacklegged and American dog ticks because shrubs will prevent the drag from reaching the ground. In such instances, adjacent areas with patchy shrub layers should be sampled instead.

Populations can also be monitored by counting ticks on live-trapped small mammals. However, because this technique is labor-intensive, requires permits, extensive experience, and safety training, it should only be considered if there is some unique need. Carbon dioxide-bait trapping works well for lone star ticks, but is of little value in sampling blacklegged tick populations. 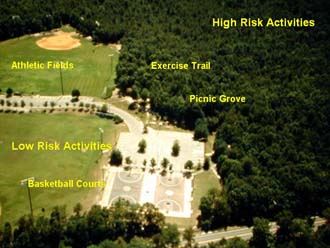